Vegan all-year-round not just for Veganuary

Vegan all-year-round not just for Veganuary

We are nearing the end of the most widely publicised and participated Veganuary ever! With record numbers of consumers taking the opportunity to experiment with their eating habits and most eateries offering a variety of vegan options (many for the first time) for the month. So, we wanted to give some tips on how to continue enjoying eating and drinking plant-based when out and about on the Island once February hits, and ‘normal’ menus resume. 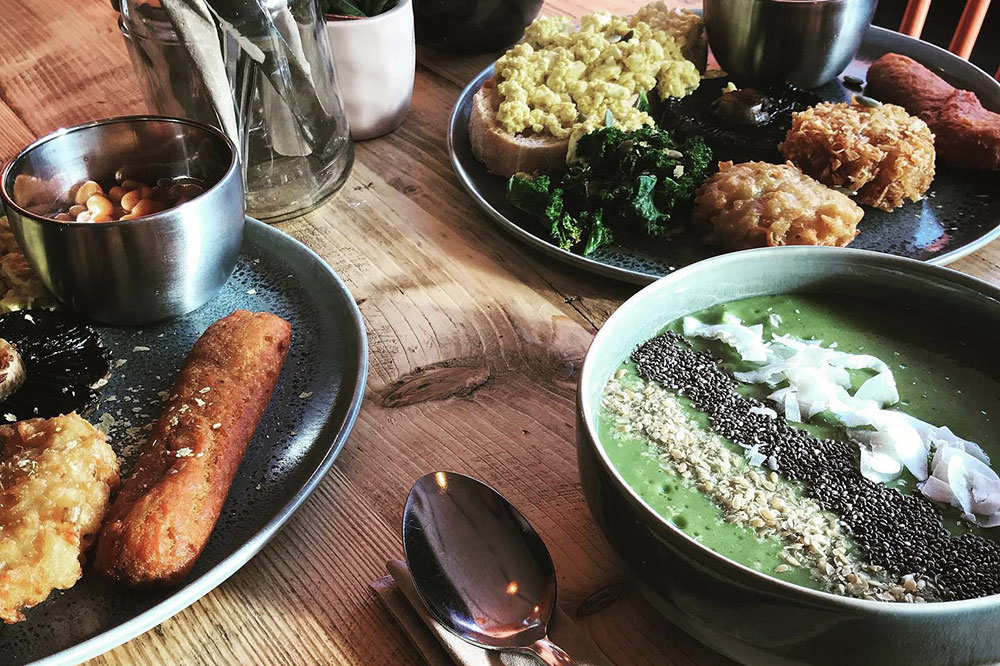 Peach is open for breakfast daily so why not pop in for a full vegan?

Since opening our café during the summer of last year, opportunities to indulge in our favourite pastime (going out for breakfast/lunch/dinner) have become particularly hard to come by, so, when we do manage to make time, we want to do it well! Thankfully, during our years of eating (and living) vegan, we’ve found a pretty great bunch of ‘go-to’ Island establishments which never fail to satisfy for any foodie-vegan. 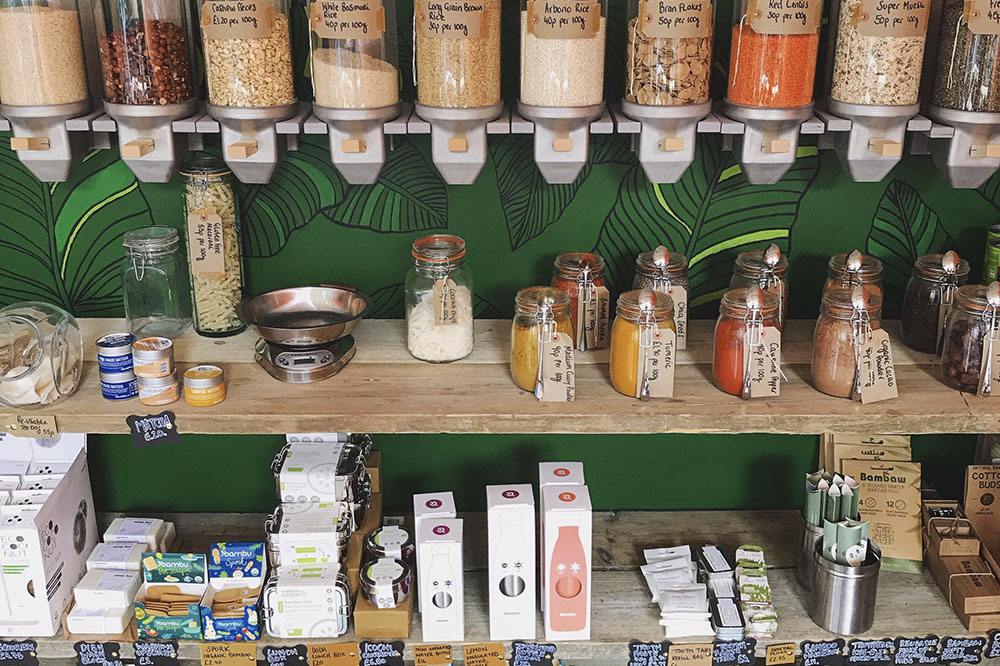 Some of the zero waste products available from Peach

Tansy’s Pantry is a great place to start. Like us, they offer a 100% vegan menu all year-round, and clearly take a lot of pride in their food. The “Vish & Chips” basically has its own cult following on the Island (for good reason), and is likely the best way to trick your stubborn dad into trying a vegan meal. They will literally have no idea. 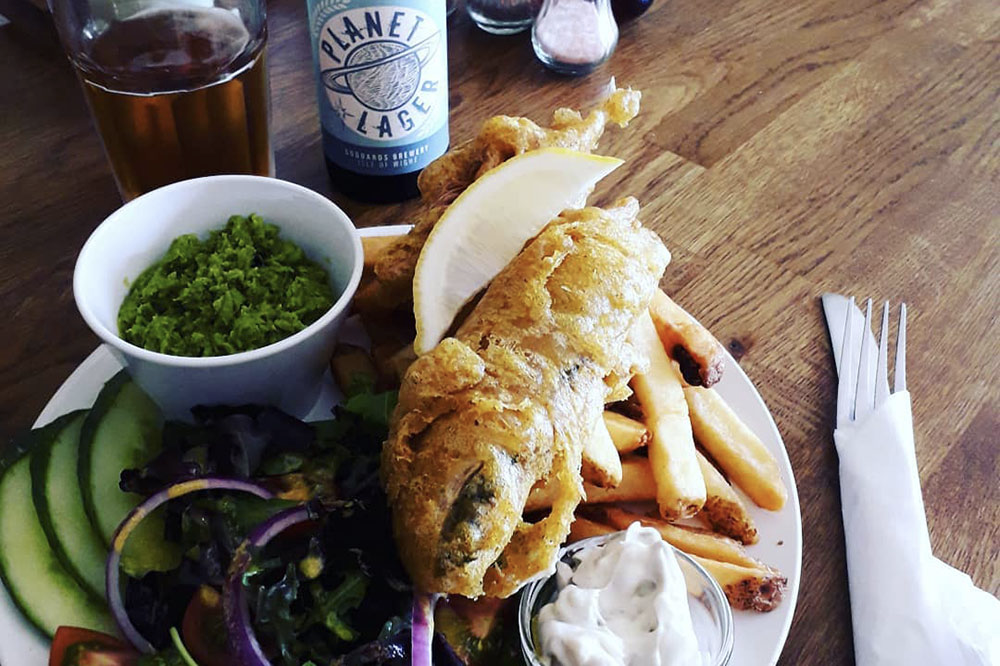 Vish and Chips at Tansy’s Pantry has a cult following

Tamarind Indian restaurant and takeaway is regularly a life-saver for us. Their curries are delicious, and for most vegetable dishes they have a distinct vegan-version to ensure no ghee or other animal products make their way into your dish. We’ll often grab a takeaway from there after a long day at the café when we can’t face going home to create another pile of washing up. We take our own containers and bag to reduce waste and they’re always happy to oblige; very refreshing when most takeaways reply with “It’s ok, the plastic bag is free”! Their vegan korma is awesome. With any Indian restaurant, make sure you’re getting boiled rice (no ghee)! 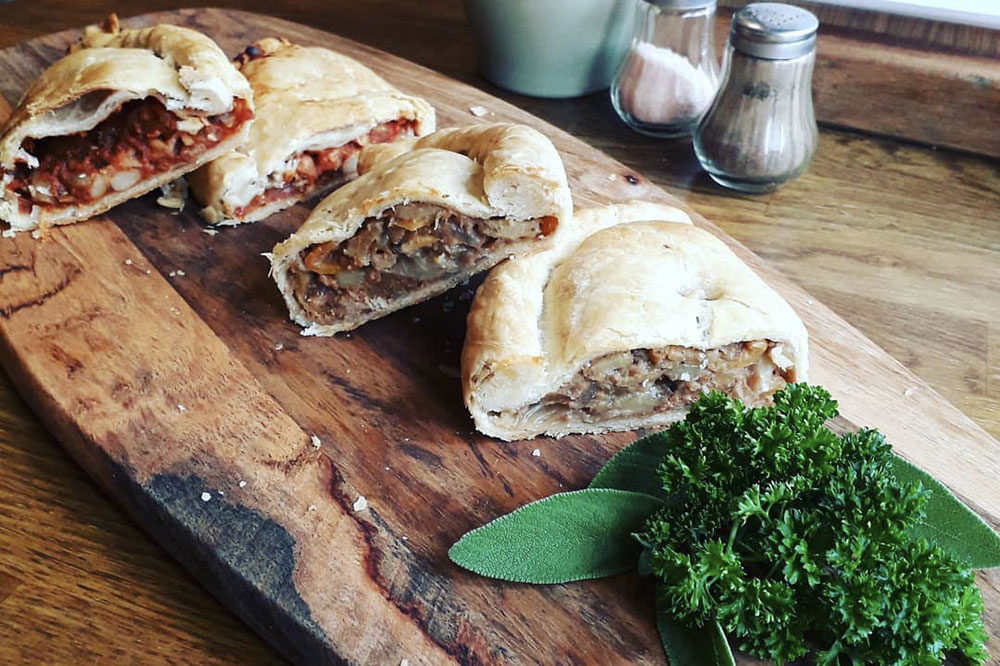 One of our ideal ways to spend an afternoon off is to take Harry (the dog) for a run along Appley Beach and follow it up with a trip to Chocolate Apothecary. They offer a variety of vegan-friendly drinks, but we pretty much exclusively stick to the “Mint Dark Hot Chocolate” with oat mylk, as it’s just excellent. 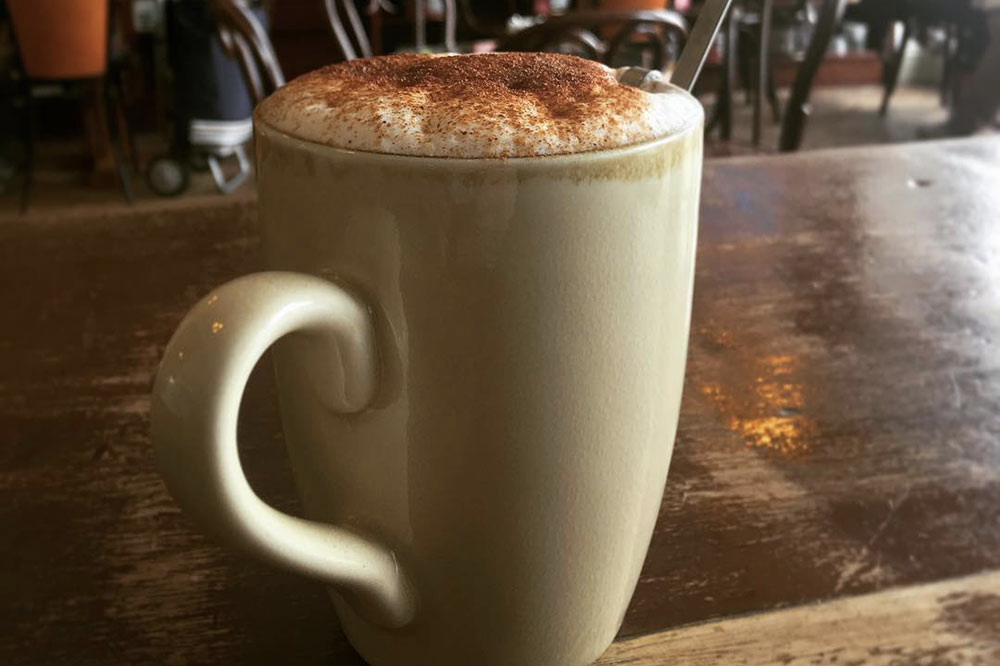 During the summer months (or often, just “month”) we regularly make a little trip to Ventnor for a vegan ice-cream from Crave, usually instigated by an Instagram post along the lines of “Today’s special is Vegan Rocher”. We drop everything and head south before it’s too late. 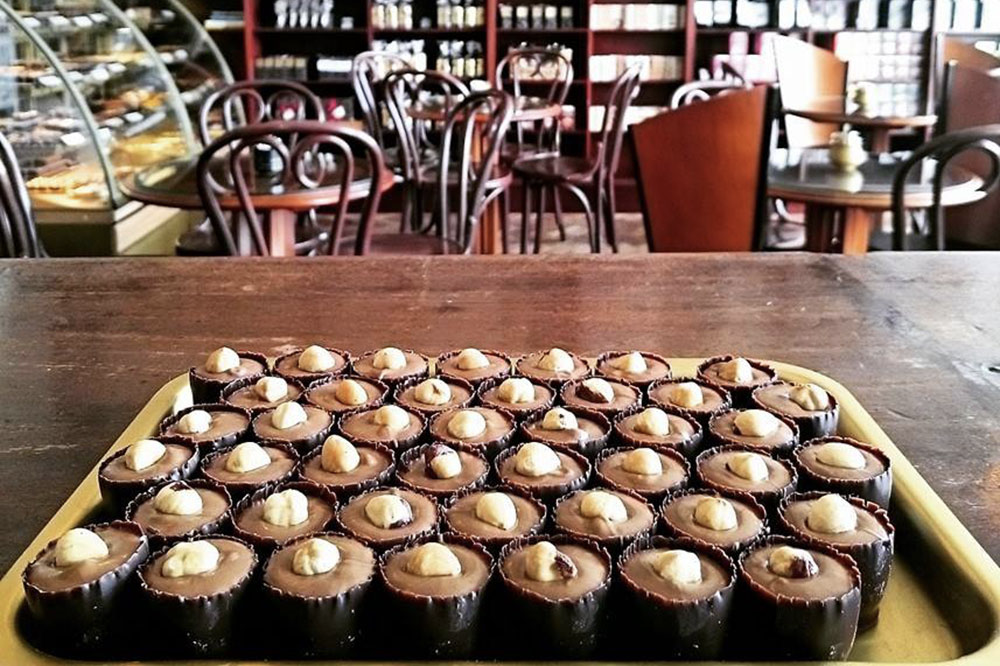 Did someone say chocolate?! Ask at the counter to see which chocolates are vegan

We weren’t sure whether to mention it, but we eat at our café Peach more than we eat at home (and it still feels like going out), so thought it should make the cut! We’re 100% vegan, and take pride in offering a wide range of dishes to suit any mood from “junky” food such as our Not-Dogs, Tricken Burger and signature shakes, to fresh warm salads, smoothie bowls, raw cakes and matcha teas. We’ve had a lot of lovely conversations with new customers taking part in Veganuary this month, and feels great to be part of such an important movement! 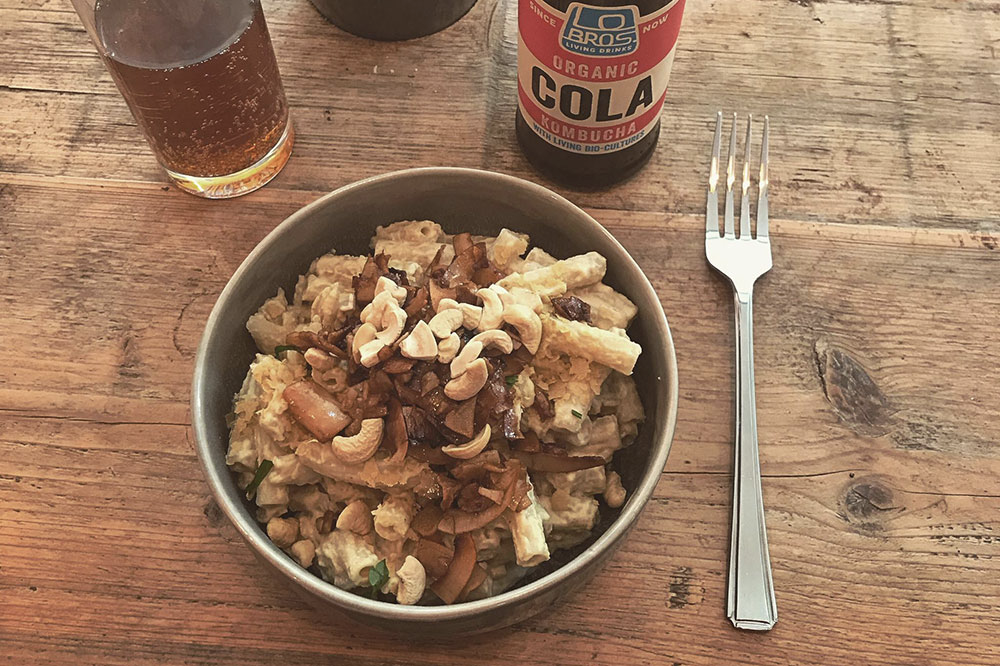 Being vegan isn’t about missing the flavours you love. How mouthwatering does this Mac’n’Cheeze

We live in Ryde, and it’s rare that more than a month will pass without one of us getting psyched to make dinner at home, but then turning to the other and making the one-word proposal “ADA?” In fact, it’s more of an instruction than a question. Once it’s been said, we kind of have to. Their menu doesn’t make it obvious which dishes are vegan-friendly, however their service is excellent and the staff clearly know their menu well, so they can help and give their recommendations for vegan options. We tend to share a bunch of small plates, including the bruschetta (without pesto), fried vegetables (without yoghurt), saksuka, hummus, falafel and Mediterranean cube potatoes. Their food is simple and delicious. 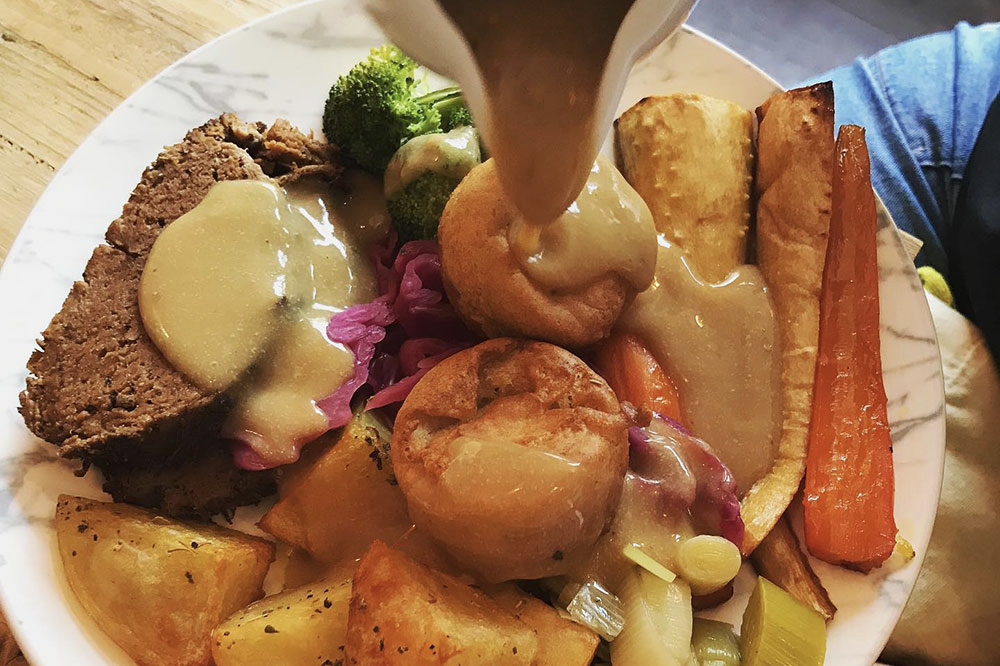 There are lots of other places we’d like to talk about, but at the risk of outstaying our welcome we’ll just squeeze them in here: Three Buoys, Skin Trade Café, The Piano, Django’s… Sorry to the many that we have missed! 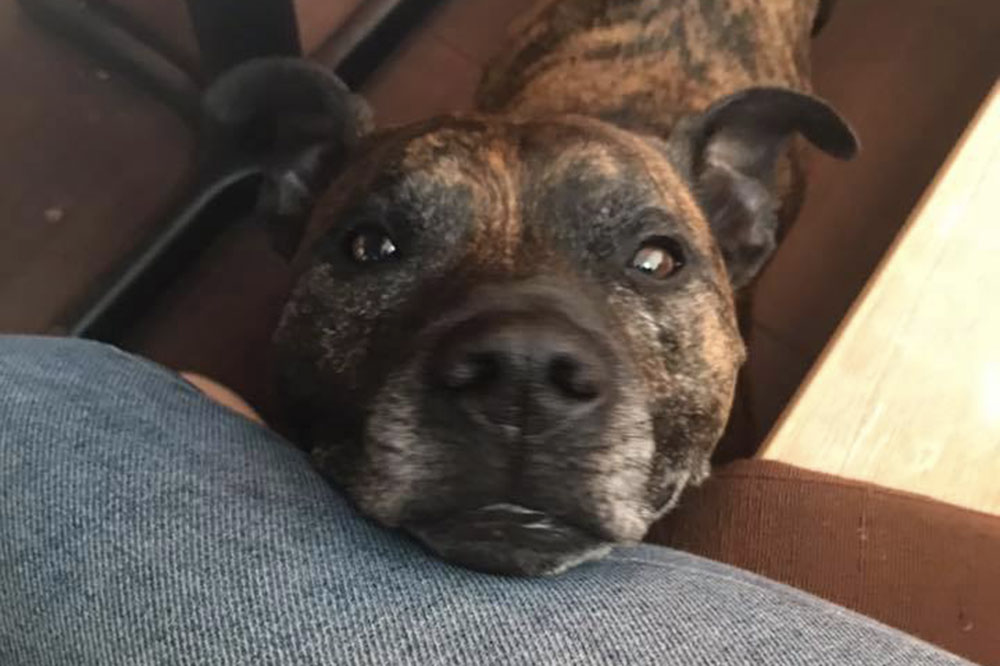 Whilst the health benefits of eating vegan is becoming more widely understood and talked about as each day passes, for us it’s important to remember that “vegan” isn’t a diet; it’s a philosophy and a lifestyle which is deeply rooted in the well-being of the planet and all of her inhabitants. It’s as much about eating habits as it is about reducing waste, showing compassion and making kind choices at every opportunity. If Veganuary can help to spread those ideals, then “Happy Veganuary”!